Tues. May 29: Mile Twelve- is a fresh, hard driving young band beautifully walking the line between original and traditional bluegrass. Since their formation in the fall of 2014, Mile Twelve has quickly been on the rise. The band has performed extensively throughout the U.S., Canada, Ireland, New Zealand and Australia. Winner of the 2017 Momentum Award by the International Bluegrass Music Association. miletwelvebluegrass.com.  Rain venue: St. Stephen’s Episcopal Church Underwritten thanks to the Wadsworth Russell Lewis Trust Fund

Tues. June 5: Marcia Ball –For over 30 years this “mighty musical force,” (Blues in Britain) has been “the Queen of Gulf Coast party music…good-time boogie and blues. …oozes southern atmosphere that carries you straight to the bayou. …infectious rhythmic patterns of the Crescent City run through her music like a rich vein of gold. A triumph. (Time Out Chicago). www.marciaball.com.  Rain venue: East Ridge Middle School (ERMS)Underwritten in part by the law firm of Cohen & Wolf P.C.

Tues. June 12: The Bumper Jacksons -This band paints America’s story from the streets of New Orleans to Appalachian hollers. Unafraid to scrap together new sounds from forgotten 78’s, they elegantly balance paying homage to the traditions while fashioning their own unique, playful style. Honored multiple times as the Mid-Atlantic’s “Artist of the Year” & “Best Traditional Band” at the Washington Area Music Awards. www.bumperjacksons.com  Rain Venue: ERMS

Underwritten  through the generosity of  Sam Hur of Ridgefield Cleaners 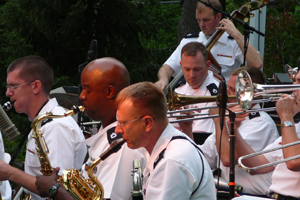 Thurs. June 21:  The Fairfield Counts – Take your annual trip down Nostalgia Lane while you listen to the big band hits of the 30s and 40s: Glen Miller, Artie Shaw, Tommy Dorsey, Duke and more. www.FairfieldCounts.com. Rain Venue: ERMS                            Underwritten through the generosity of The Ridgefield Thrift Shop

Tues. July 3: Laura Cortese & the Dance Cards –Cutting her teeth as a sideman in Boston’s roots music scene, (Band of Horses, Pete Seeger, Rose Cousins and Uncle Earl).  Now as a frontwoman and bandleader – she & the Dance Cards are based in the lyrical rituals of folk music but explore new territories of rhythm and sonics. It is also pop music, born from the roots tradition but now traveling the roads of 70s California.  www.lauracortese.net.  Rain venue: Ridgefield Playhouse Theatre

Thurs. July 5: Eileen Ivers -The pre-eminent exponent of the Irish fiddle in the world today.  She is Grammy awarded, Emmy nominated, an original Musical Star of Riverdance, as well as being Nine Time All-Ireland Fiddle Champion. She has performed with more than 40 orchestras worldwide, most recently the Hartford Symphony Orchestra in April. CHIRP is thrilled to have her back with her band. www.eileenivers.com.  Rain Venue: Ridgefield Playhouse.   Underwritten through the generosity of Allan Purkiss of Purkiss Capital Advisors, LLC 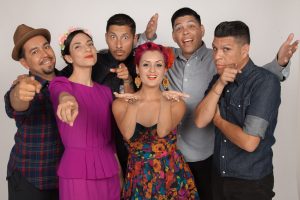 Thurs. July 12: The Birds of Chicago. – Allison Russell’s clarion voice wraps around the broken, country-soul croon of J.T. Nero. It delivers echoes of mountain gospel, doo wop and classic soul with back porch instrumentation. The band draws heavily on the gospel tradition and the music  feels like a new, secular gospel of sorts. For Birds of Chicago, every word counts. Every note counts. No gold-dusting, no filler. Back by demand for a third consecutive year.  http://www.birdsofchicago.com.  Rain venue: Ridgefield Playhouse  Underwritten through the generosity of The Leir Foundation.

Tues. July 17: The Revelers – A Southwest Louisiana supergroup … a tonic of swamp-pop, Cajun, country, blues, and zydeco. Among the sextet are founding members of the Red Stick Ramblers and The Pine Leaf Boys. And with Chris Miller on the saxophone his fiery tone and homage to the swamp pop masters is the “glue” in the Revelers unstoppable sound. Fun, Fun, Fun!   www.Revelersband.com  Rain Venue: The Ridgefield Playhouse               Underwritten in part by Fairfield County Bank

Thurs. July 19: Molly Tuttle Band – IBMA “Guitar Player of the Year” in 2017, as well as nominee for three other IBMA awards that year; 2016 IBMA Momentum Award winner, this young bluegrass player has no where to go but up! She began performing on stage when she was 11, Since then, she’s appeared on A Prairie Home Companion and at Hardly Strictly Bluegrass, won first place in the prestigious Chris Austin Songwriting Competition at Merlefest,. She has already received more than two million YouTube views.  http://www.mollytuttlemusic.com Rain Venue: ERMS                        Underwritten in part through the continuing generosity of Bob & Loire Leavitt

Tues. July 31: Jamie McLean Band – “McLean and company ooze drops of southern roots rock, blues, R&B, funk and soul out of every note… the rock & roll swagger of the Rolling Stones combined with the songwriting prowess of Ryan Adams.” – Jambase.  This is their first CHIRP performance after opening several times at Ridgefield Playhouse for notables such as Greg Allman, Aaron Neville and Trombone Shorty. http://www.jamiemcleanband.com Rain Venue: Ridgefield Playhouse                        Underwritten in part by the Anna-Maria & Stephen Kellen Foundation

Thurs. Aug. 2: The Steel Wheels -This 4 piece string band plays a strong brew of original soulful mountain music that springs in part from their shared Mennonite heritage.  Based in the Blue Ridge Mountains, with strong commitments to their roots and environs, often huddled around a single mike, they marry old time musical traditions with their own innovative sound.  The result = MAGIC.   http://www.thesteelwheels.com  Rain Venue: ERMS 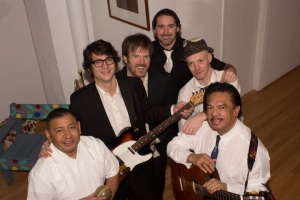 Tues. Aug. 14: David Myles – A consummate performer, Canadian Myles sounds like a “cross between James Taylor and Michal Buble” (Elmore Magazine). He leaps easily from rock to jazz, Latin music and hip-hop to purely country croons.  He’s a master of many genres and a Juno Award Winner. http://www.DavidMyles.com   Rain venue: Ridgefield Playhouse                                     Underwritten through the generosity of The Ridgefield Thrift Shop

nger, songwriter and activist who has become one of the most respected musicians in Folk, Roots and Americana circles. She has appeared on NPR, Austin City Limits, Mountain Stage, etown, Sirius/XM, Air America Radio and has toured worldwide as a solo artist and in support of Richard Thompson, Patty Griffin, Mary Chapin Carpenter and Dan Fogelberg.
Her songs have been covered by Joan Baez, Bob Geldof, Tom Rush and Rosanne Cash and have appeared in films, PBS specials and on prime-time TV. She has been inducted into the Austin Music Hall of Fame and recognized with countless Austin Music and Folk Alliance awards. Eliza’s music has always offered a vivid reflection of the times we live in, full of joys and sorrows, each song a window into a life of struggle and triumph in a world she feels is “poised on the edge of moral, economic and environmental bankruptcy.”

Thurs. Aug. 23:  James Maddock A rock & roll lifer, James Maddock has been carving his unique path since the 1980s, when the British-born singer/songwriter kicked off his career with a raw, soulful voice; a storyteller’s sense of narrative; and the ability to blur the lines between folk, classic pop, and rock. Rain Venue: ACT Theatre.                             Underwritten by Barbara Manners and Naomi Stern

Thurs. Aug. 30: C.J. Chenier & the Red Hot Louisiana Band – “Heir to the Zydeco throne.” (Billboard Magazine). Back by huge popular demand for his 9th consecutive year at CHIRP. Come prepared to dance and to have lots of fun!.   www.officialcjchenier.com  Rain Venue: ERMS

Underwritten in part by the Ridgefield Rotary Club.